The Pallet Changer is probably the most sophisticated model we build, this unique system enables the operator to swap pallets from beneath the load without any necessity to touch them by hand.

All pallet changers are painted with two coats of zinc primer and a 2 pack epoxy acrylic top coat as standard. Designed and built to meet customer requirements on stack heights where goods need to be stable when resting on their side,the pallet changers side clamping maintains the integrity of the load. This would always be a totally automated system and supplied with the appropriate fixed guarding. 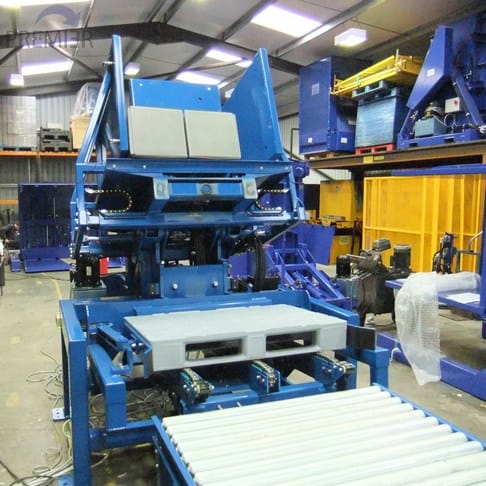 The Premier Pallet Changer represents the latest concept in pallet transfer offering a totally “hands-free” alternative to conventional inverters. The principle has been around since the early 1990’s but is only now reaching perfection. It was always very limited in the type of load it could handle, but new modifications are opening up more possibilities.

The operating principle of the Pallet Changer begins with the pallet being gripped and the load itself being contained by a top clamp and two moving sidewalls. The machine tips back to a position beyond 90° at which point the goods need to rest on their side with just side and top support. Now the loading table of the machine is released and the pallet only is returned to ground level. It is released and can be exchanged by the waiting pallet truck. The system then goes through its second phase to bring the stack upright on its new pallet.

The system is relatively complex and therefore has to run on a plc controlled auto-sequence. This in turn means the need for full fixed and photo electric guarding. There is always a manual override for each function. The Pallet Changer is not a low-cost machine and so far most buyers have come from the pharmaceutical industry where budgets are less restricted than in general warehousing. The application with drug companies is always the need to switch goods to and from hygienic in-house pallets. The benefits are that employees are not required to lift the pallet manually. With some weighing over 25 kgs, this would otherwise need to be a 2 person operation. It also avoids the risk of pallets being dropped on feet or causing splinters in hands.

Please click on the link below and fill out the form

Each machine is supplied with a two years warranty, a complete set of spare parts, and Annual Maintenance Contract for the duration of the payment terms.